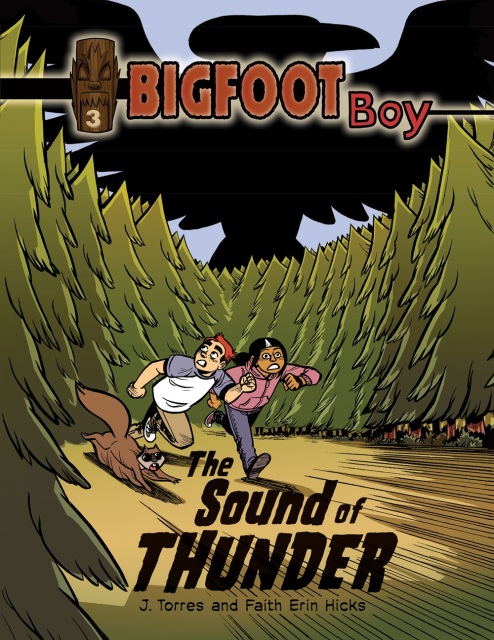 This conclusion to the Bigfoot Boy graphic novel trilogy adds a backdrop of Pacific Northwest mythology to the popular story about an ordinary boy who becomes a hero through the power of magic. As the book begins, Rufus, Penny and their squirrel friend, Sidney, are eager to recapture the magic totem they lost to the ravens in the previous book. But how? With Rufus no longer in possession of his powers, the trio seems destined to fail.

Their luck turns, however, when they learn the local legend of Thunderbird. It seems the mighty bird had created the magic totem decades earlier to be used to ward off developers who wanted to destroy the precious Pacific Northwest forest. Empowered with a new-found purpose to protect the woods, they finally know just what they have to do to save the day- and the trees!

This book is an excellent choice to expose reluctant readers to literary devices such as plot and character development, the importance of dialogue and folklore. It could also provide a terrific jumping-off point for discussions about the environment, as well as the concept of civic engagement and making a difference in your community. 100 pages

"In this trilogy conclusion, Rufus returns to the north woods, but can he do anything to save them without his mystic totem?... Readers new to the series will be a bit lost, but no graphic-novel shelf serving young nature or cryptid fans should be without the whole trilogy. Hitting 'The End' will just make fans want to start over again." -Kirkus Reviews, Starred Review (Ages 9-12)