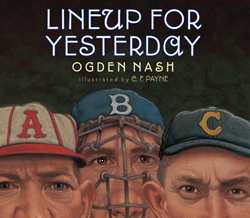 In 1949, SPORT magazine published Lineup for Yesterday, a collection of poems by Ogden Nash celebrating the greatest big-league baseball players of the 1800's and early 1900's. Using an alphabetical approach, the famous wordsmith paid entertaining tribute to 24 legends of the diamond, encapsulating each in just 4 clever lines.

Creative Editions presents this masterpiece to a new generation of fans, reintroducing icons from the formative years of professional baseball. The masterful mixed-media illustrations portray these heroes of summer in their athletic primes in this, the first-ever picture book publication of Nash's classic. 56 pages

"Payne's well-detailed, on-the-field portraits- a few with hints of caricature- show off the artist's considerable talent for capturing his subjects' personalities as well as their likenesses. His familiarity with the game is apparent in touches like the position of a pitcher's hand after the release of a knuckle ball and the look of fierce concentration on a batter's face... Youngsters who relish the history of the sport will treasure this beautifully presented lineup from a former era." -School Library Journal (Grade 4-8)