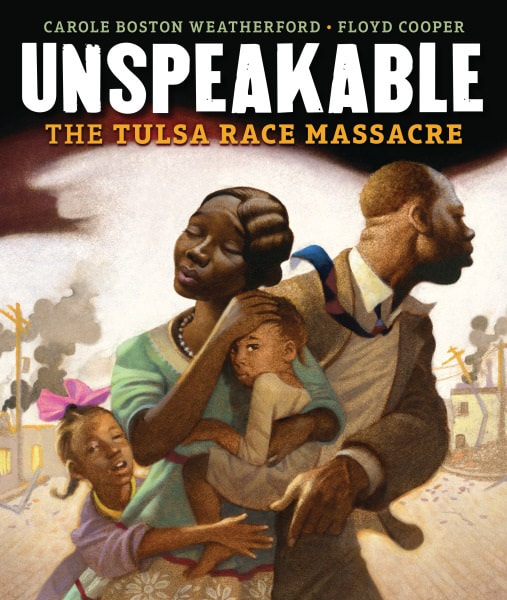 This celebrated author and illustrator provide a powerful look at the 1921 Tulsa race massacre, one of the worst incidents of racial violence in our nation's history. The book traces the history of African Americans in Tulsa's Greenwood district and chronicles the devastation that occurred on May 31 and June 1, 1921 when a white mob attacked the Black community.

Black residents living in this neighborhood, known as Black Wall Street, were forced from their homes. Many were imprisoned and historians believe that as many as 300 people may have died. Businesses were looted and burned to the ground, all in all encompassing 35 city blocks.

News of what happened was largely suppressed, and no official investigation occurred for 75 years. This picture book sensitively introduces young readers to this tragedy and concludes with a call for a better future. Of significant importance is that the illustrator's grandfather was a resident of the neighborhood at that time and revealed his experience to his grandson many years ago. 32 pages

"Ideal for classroom libraries and a deeper study of American history, this title is a must-have for those seeking the painful and complete truth." -Booklist, Starred Review (Grades 3-6)

"A once-thriving Black community was destroyed, and the story of how it happened went untold for decades... A somber, well-executed addition to the history as the incident approaches its 100th anniversary." -Kirkus Reviews, Starred Review (Ages 8-12)

"By focusing not just on the attack, but also on the positive achievements of the Black business owners, lawyers, and doctors of Greenwood, the book succeeds in teaching the tragedy of the Tulsa Race Massacre and the legacy of Black Wall Street. An author's note explains the impact of the event and a subsequent cover-up by the city." -Publishers Weekly, Starred Review (Ages 9-10)

For more information about the massacre, visit the Tulsa Historical Society and Museum's website. Request a Discussion Guide for Educators and Parents created by Dr. Sonja Cherry-Paul from us (appropriate for grades 3-6 with extensions for grades 7-8)

Watch a video of the author and illustrator discussing the book