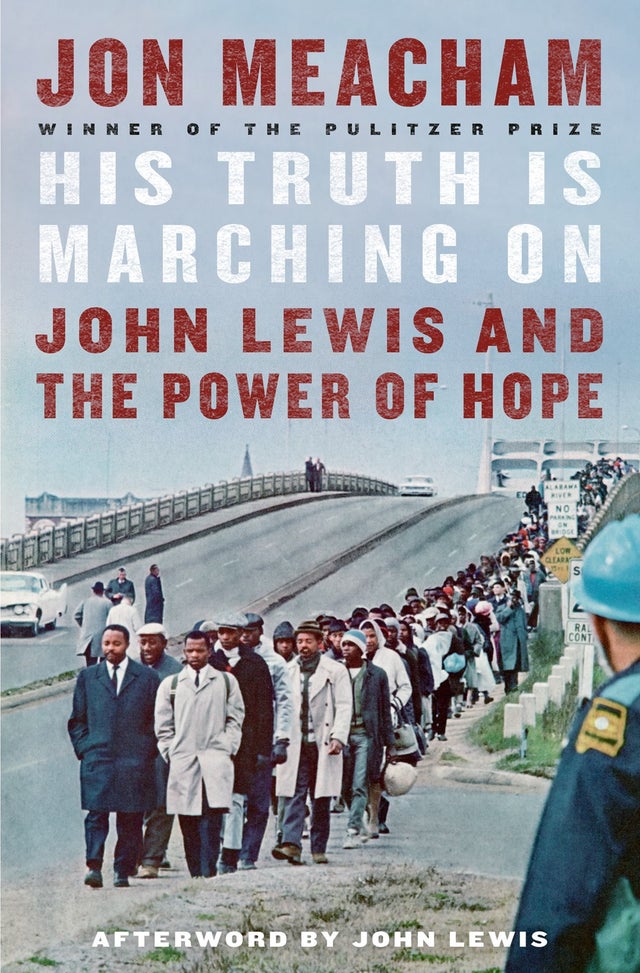 His Truth Is Marching On [hc]

John Lewis and the Power of Hope

By Jon Meacham with a afterword by John Lewis

John Lewis, who at age 25 marched in Selma and was beaten on the Edmund Pettus Bridge, was a visionary and a man of faith. Using intimate interviews with Lewis and his family and deep research into the history of the civil rights movement, Meacham writes of how the activist and leader was inspired by the Bible, his mother’s unbreakable spirit, his sharecropper father’s tireless ambition, and his teachers in nonviolence, Reverend James Lawson and Martin Luther King, Jr. A believer in hope above all else, Lewis learned from a young age that nonviolence was not only a tactic but a philosophy, a biblical imperative, and a transforming reality. At the age of four, Lewis, ambitious to become a preacher, practiced by preaching to the chickens he took care of. When his mother cooked one of the chickens, the boy refused to eat it- his first act of non-violent protest. Integral to Lewis’s commitment to bettering the nation was his faith in humanity and in God, and an unshakable belief in the power of hope.

Meacham calls Lewis “as important to the founding of a modern and multiethnic twentieth- and twenty-first century America as Thomas Jefferson and James Madison and Samuel Adams were to the initial creation of the nation-state in the eighteenth century. He did what he did- risking limb and life to bear witness for the powerless in the face of the powerful- not in spite of America, but because of America, and not in spite of religion, but because of religion.” 368 pages

"Throughout the book, Meacham not only shows Lewis’ obvious talent as an organizer and an instigator of what he called “good trouble”; what also emerges is the story of a preacher, the calling that a young Lewis yearned for and never really gave up... An elegant, moving portrait of a giant of post-1950 American history." -Kirkus Reviews, Starred Review

Listen to a sample passage read by J.D. Jackson