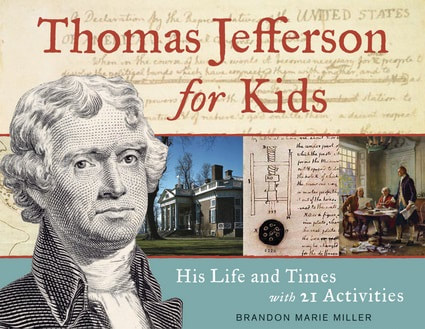 His Life and Times with 21 Activities

An architect, statesman, farmer, and inventor, Thomas Jefferson had few equals among this nation’s founders. Left fatherless at a young age, he was a hardworking scholar who came into his own as a lawyer, landowner, and county leader. Elected to the Virginia Assembly in 1769, Jefferson became an eloquent critic of the colonial policies of Great Britain and King George III. His talents made him the perfect candidate to write the Declaration of Independence, which set the United States apart in a world ruled by monarchs.

Jefferson, however, was not without his contradictions. His quill penned the immortal phrase “all men are created equal,” but during his lifetime he enslaved 600 people. And though he sought elected office, he was sensitive to criticism and often wished to escape his public role and return to his Monticello estate.

Author Brandon Marie Miller captures the complexity of this talented leader through his original writings and hands-on activities from the colonial era. 144 pages

"Jefferson is a complicated figure. His contribution to the founding of our nation was immeasurable, but he was much less successful in managing his personal affairs... Miller's book is a good choice for those looking for an honest appraisal of the man." -School Library Journal (Grades 5-7)

"Miller's well-researched biography of Jefferson does quite a good job of describing his formative years, setting later events in their historical context, and acknowledging the complex personal and political challenges the man faced... A balanced, informative account Jefferson's life." -Booklist (Grades 5-8)