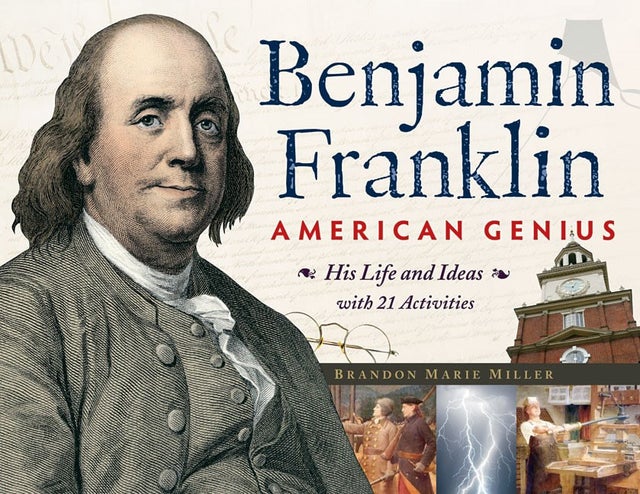 His Life and Ideas with 21 Activities

Benjamin Franklin was a 17-year-old runaway when he arrived in Philadelphia in 1723. Yet within days he’d found a job at a local print shop, met the woman he would eventually marry, and even attracted the attention of Pennsylvania’s governor. A decade later, he became a colonial celebrity with the publication of Poor Richard: An Almanack and would go on to become one of America’s most distinguished Founding Fathers. Franklin established the colonies’ first lending library, volunteer fire company, and postal service, and was a leading expert in the study of electricity. He represented the Pennsylvania colony in London but returned to help draft the Declaration of Independence. The new nation then named him Minister to France, where he helped secure financial and military aide for the breakaway republic.

Author Brandon Marie Miller captures the essence of this exceptional individual through both his original writings and hands-on activities from the era. Readers will design and print an almanac cover, play a simple glass armonica (a Franklin invention), experiment with static electricity, build a barometer, and more. The text also includes a time line, glossary, Web and travel resources, and reading list for further study. 144 pages

"... the relaxed, narrative style and open book design, with archival illustrations and frequent sidebars, will attract browsers in a wide age range, while the facts will spark classroom discussion." -Booklist (Grades 7-12)

"Miller does an excellent job of presenting a synopsis of Franklin's life in a highly readable manner." -School Library Journal (Grades 4-8)