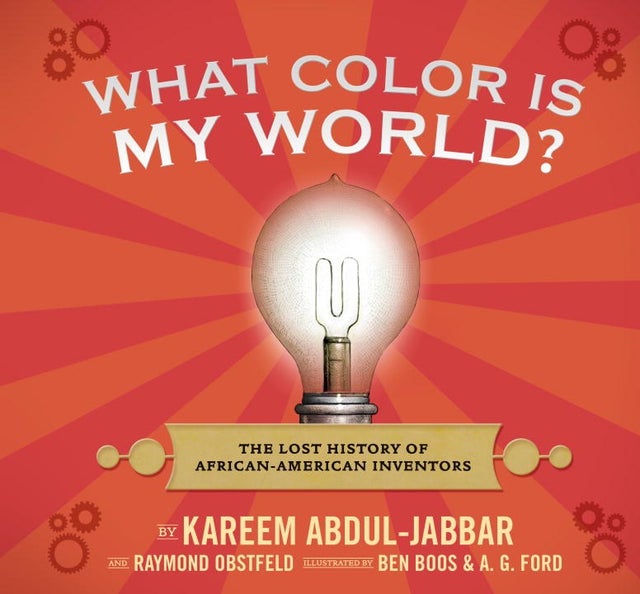 What Color Is My World? [hc]

The Lost History of African-American Inventors

Did you know that James West invented the microphone in your cell phone? That Fred Jones invented the refrigerated truck that makes supermarkets possible? Or that Dr. Percy Julian synthesized cortisone from soy, easing untold people’s pain? These are just some of the black inventors and innovators scoring big points in this dynamic look at several unsung heroes who shared a desire to improve people’s lives.

Offering profiles with fast facts on flaps and framed by a funny contemporary story featuring two feisty twins, here is a nod to the minds behind the gamma electric cell and the ice-cream scoop, improvements to traffic lights, open-heart surgery, and more- inventors whose ingenuity and perseverance against great odds made our world safer, better, and brighter. Back matter includes an authors’ note and sources. 44 pages

"In his first foray into writing for children, basketball superstar Abdul-Jabbar teams with Obstfeld to introduce 16 mostly lesser-known African American inventors through a fictional story told by young twins, who learn that many items in a typical house and used by a majority of Americans were invented or developed by African Americans." -Booklist (Grades 3-6)

"A fictional story lies at the heart of this unusually formatted collective biography... As the figures are introduced, foldouts on the sides of the pages contain notes... about each one. More detailed profiles of other inventors fill the spreads... Information about the subjects' home, lives, and avocations is a welcome addition." -School Library Journal (Grades 4-7)