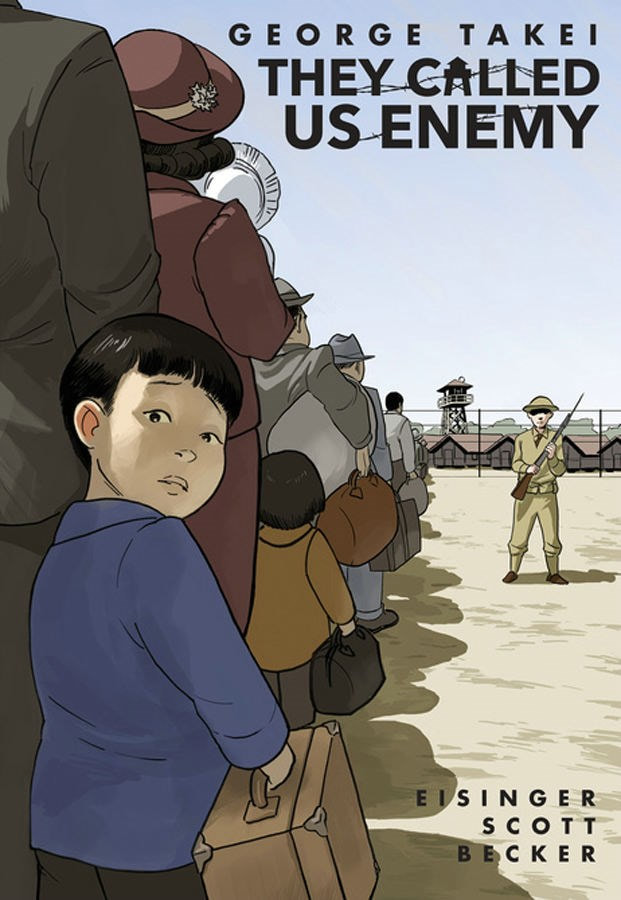 They Called Us Enemy [pb]

George Takei has captured hearts and minds worldwide with his captivating stage presence and outspoken commitment to equal rights. But long before he braved new frontiers in Star Trek, he woke up as a four-year-old boy to find his own birth country at war with his father’s- and their entire family forced from their home into an uncertain future.

In 1942, at the order of President Franklin D. Roosevelt, every person of Japanese descent on the west coast was rounded up and shipped to one of ten “relocation centers,” hundreds or thousands of miles from home, where they would be held for years under armed guard.

They Called Us Enemy is Takei’s firsthand account of those years behind barbed wire, the joys and terrors of growing up under legalized racism, his mother’s hard choices, his father’s faith in democracy, and the way those experiences planted the seeds for his astonishing future.

What does it mean to be American? Who gets to decide? When the world is against you, what can one person do? 208 pages

"Takei, together with Justin Eisinger and Steven Scott, interweaves scenes of his adult realizations and reflections, as well as key speeches and historical events of the period, among the accounts of his childhood, which is very effective at providing context for those memories. Becker's spare, fine-lined, manga-inspired artwork focuses intently on faces and body language, keeping the story centered in the realm of the personal." -Booklist, Starred Review (Young Adult)

"This evocative memoir shares stories of the nation’s past, draws heartbreaking parallels to the present, and serves as a cautionary tale for the future. For all readers old enough to understand the importance of our collective history." -School Library Journal, Starred Review (Grades 7+)

"Giving a personal view into difficult history, Takei's work is a testament to hope and tenacity in the face of adversity." -Publishers Weekly, Starred Review

Download a teacher's guide developed by the Education Department of the Japanese American National Museum. The guide was designed for students in grades 6-12 any may be adapted for elementary and college students.