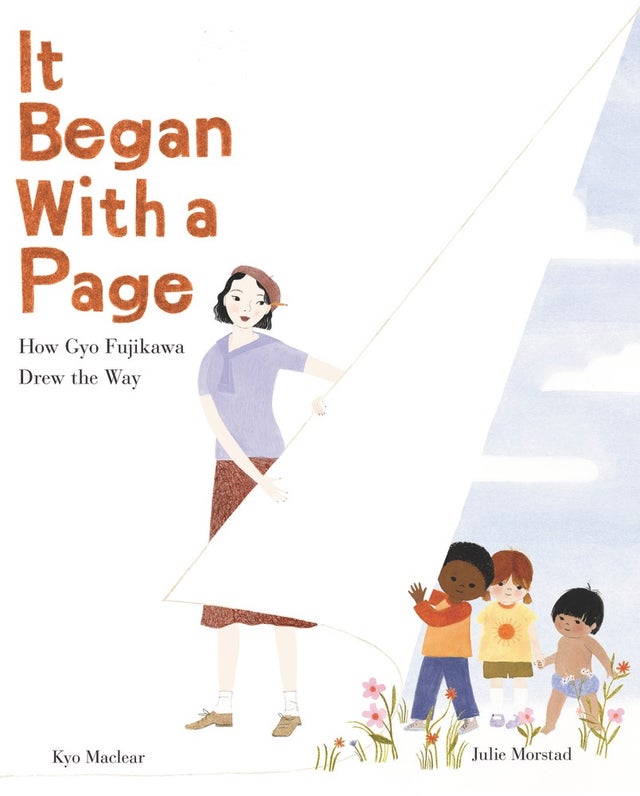 It Began With a Page [hc]

How Gyo Fujikawa Drew the Way

This picture book biography portrays the most moving moments in the life of Gyo Fujikawa, a groundbreaking Japanese American hero in the fight for racial diversity in picture books.

Growing up in California, Gyo Fujikawa always knew that she wanted to be an artist. She was raised among strong women, including her mother and her teachers, who encouraged her to fight for what she believed in. During World War II, Gyo’s family was forced to abandon everything and were taken to an internment camp in Arkansas. Far away from home and from her family, Gyo worked as an illustrator in New York while her innocent family was imprisoned.

Seeing the diversity around her and feeling pangs from her own childhood, Gyo became determined to show all types of children- white, black, Asian, girl, boy, immigrant- in her books for children. There had to be a world where they saw themselves represented. Gyo’s book Babies was initially rejected by her publisher at Grosset & Dunlap. But after Gyo insisted, they finally relented, and Babies went on to sell almost two million copies. Gyo’s books paved the way for publishers, teachers, and readers to see what we can be when we welcome others into our world.

Includes extensive back matter, including a note from the creators, a timeline, archival photos, and further information on Gyo Fujikawa. 48 pages

"This beautiful biography offers a fitting tribute to an artist with a lasting legacy in American picture books." -Booklist, Starred Review (Kindergarten-Grade 3)

"Maclear and Morstad's biography conveys with quiet power how recently segregation reached into every aspect of American life, and how one woman did her part to defeat it." -Publishers Weekly, Starred Review (Ages 4-8)