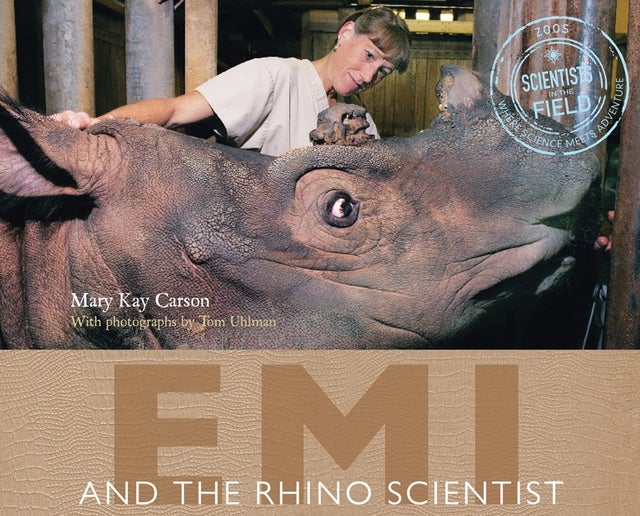 Scientists in the Field: Emi and the Rhino Scientist [pb]

Terri Roth trudges through the thick, dark Sumatran jungle. She's looking for a rhinoceros that's been seen in the area. It's a rare Sumatran rhino, the world's smallest rhino and one of the most endangered mammals on the planet.Suddenly she spots a young female rhino through the tangle of ferns and trees. The stocky animal is covered in reddish hair, and her snout sports two stubby horns. The rhino walks right up to Terri. The scientist slowly reaches out her hand and touches the rhino's big nose. The wild rhino's curiosity and friendliness remind Terri of Emi, the female Sumatran rhino that lives at the Cincinnati Zoo where Terri works. Terri is working with Emi to help save Sumatran rhinos from extinction-one calf at a time. 64 pages

"Through lively prose and stunning full-color photographs, readers learn how Terri Roth, an expert in endangered-species reproduction at the Cincinnati Zoo, helped Emi to give birth to the first Sumatran rhino born in captivity in more than 100 years... Like many of the entries in this popular series, Emi is engaging and informative." -School Library Journal (Grades 5-8)

"The emphases on reproductive science and zoo work both make this an unusual addition to the admirable Scientists in the Field series, one that should be welcome in high-school as well as middle-school libraries." -Kirkus Reviews, Starred Review (Ages 10-16)