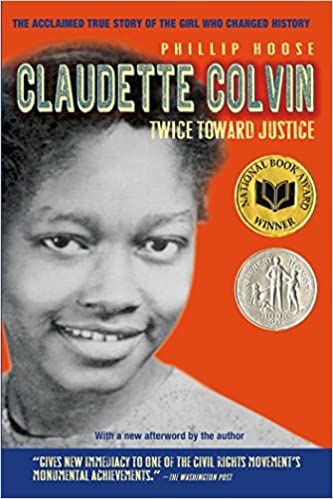 "It's my constitutional right!" screamed Claudette Colvin as she was dragged off a segregated city bus in Montgomery, Alabama, after refusing to give up her seat to a white woman. It was March 2, 1955- nine months before Rosa Parks took a similar stand. But instead of being celebrated as Parks was, Colvin was shunned by her classmates and dismissed by community leaders. Undaunted, a year later she dared to challenge segregation again as a key plaintiff in Browder v. Gayle, the landmark case that did for transportation what Brown v. The Board of Education did for education.

Called "unforgettable" by The Wall Street Journal, this outstanding, ground-breaking account of an almost forgotten civil rights pioneer garnered praise and accolades, including a National Book Award, a Newbery Honor, and a Robert F. Sibert Book. As The New York Times said in a glowing review, Hoose "finally gives [Colvin] the credit she deserves." 160 pages

"While virtually all students know Rosa Parks's story, this well-written and engaging book will introduce them to a teen who also fought for racial justice and give them a new perspective on the era, making it an outstanding choice for most collections." -School Library Journal, Starred Review (Grades 6+)