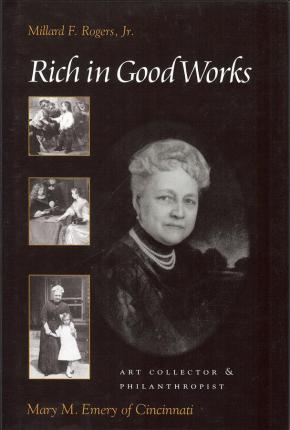 Part of the Ohio History and Culture series

At the death of her husband in 1906, Mary Muhlenberg Emery (1844–1927) became one of the richest women in the United States. Recognizing her “vast responsibility,” as she wrote in a letter to the American author, Dorothy Canfield Fisher, she embarked on a philanthropic program that endowed or initiated children’s programs, hospitals and medical institutions, orphanages, colleges and universities, an art museum, a zoological park, various cultural agencies, and other causes that benefited humankind.

Mary Emery’s most costly benefactions were directed to the founding of Mariemont, Ohio, a planned community near Cincinnati, and to the formation of a major collection of paintings. Her paintings by such old masters as Titian, Mantegna, Van Dyck, Gainsborough, and Hals were bequeathed to the Cincinnati Art Museum.

Although she was a member of Newport, Rhode Island, and Cincinnati society during the nineteenth century’s “Gilded Age,” she lived apart from the conspicuous consumption so characteristic of her times.

This well-illustrated biography explores her gifts and life from its beginnings in New York City through family tragedies to the legacy she left behind. 237 pages